I haven’t meant to go radio silent. #flat493 is gearing up for an unexpected life change — not a baby — so I will admit I have been a smidge preoccupied.

The last few weeks have had lots of cooking and trying to keep up with all our stories on the teevee while snuggling the puppers. All very, blissfully… normal — with a few notable exceptions.

Around this time last year, I started listening to the Welcome to Night Vale podcast on my volunteer dog transport drives. Turns out, it is also great for running and terrible commutes, so I got all caught up on their several years of archived shows not too long ago.

At the end of September, we went to go see a live showing of WTNV with Cecil, the co-creators, and several other company members. Their live shows are standalone stories that require no knowledge of the podcast, so even Hampton had fun. 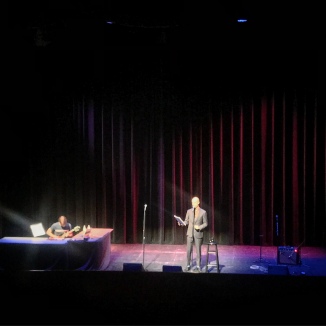 if you know, you know. And are terrified. Rightly.

He also got to eat at one of our all time favorite restaurants, Mateo, beforehand, which helped.

If anyone wants to give us the capital to start a tapas restaurant in Winston-Salem, just let me know.

This trip was also a minibreak to see family and friends back in the Triangle. Hampton even got to watch an NC State football game at an NC State bar. It was even my idea!

….because I really wanted one of their burgers. I have literally dreamed about these things.

Last weekend we spent in the mountains for the wedding of our dear friends Jenny and Cassie. Hampton met Jenny when they both worked at the Raleigh Trader Joe’s, and now they all work in the Winston store.

And this is the second October in which Hampton has officiated a Trader Joe wedding.

This one had a western theme, so he based his outfit on Jesse Custer from the Preacher comic. We haven’t read it, admittedly, but are big fans of the tv show. Much like WTNV it is supernatural and tends toward the violent, all while being hilarious and often surprisingly heartwarming.

To see these ladies surrounded by all these folks who love them and who get it — why the heck is it so hard for others to understand?

Our cabin had two burners, a toaster oven, and assorted questionable utensils.

So, of course, we made Coq au Vin and croque monsieurs. Apparently this makes us boogie. 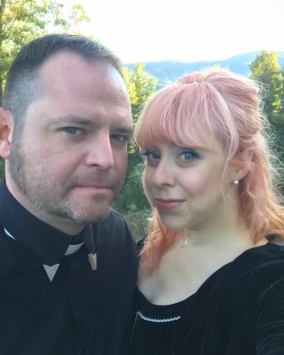 Fun fact, a friend (also called Jenny) is in a crafting facebook group where someone shared art they made for this particular wedding.  Jenny mentioned that one of her friends was there and that said friend’s husband was the officiant, and the other crafter said that he was great — and we were “amazing” dancers. Keeping that chat screenshot forever.

We have a rehearsal tomorrow for another Phoenix Theatre Company production of Dying for a Drink, this time at Summerfield Farms.

I should be reviewing lines, but, dang, it’s a pretty day. I think I’ll just sit here for a bit longer with a book, a beer, and the George.

Ironically, I recently spent several weeks delivering one of my favorite lines ever, “Normal is an illusion. What’s normal for the spider is a calamity for the fly.”

Normal day, let me be aware of the treasure you are. Let me learn from you, love you, bless you before you depart. Let me not pass you by in quest of some rare and perfect tomorrow. Let me hold you while I may, for it may not always be so. One day, I shall dig my nails into the earth, or bury my face in the pillow, or stretch myself taut, or raise my hands to the sky and want, more than all the world, your return. — author unknown