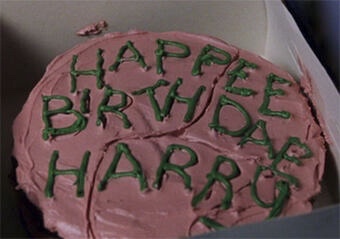 While I haven’t been posting about them, collabs have still been happening. Collabs are basically where a bunch of people cook on a theme and use a common hashtag to share. As everyone’s favorite wizard turns 40 today, it was only natural we celebrate Harry Potter. One of the hosts is my Insta-friend Dora, who does amazing food photography, and the other is a grad student obsessed with sourdough. Sometimes, the Internet is a good place.

I turned to my usual sounding board for help in narrowing down the one million Harry Potter-related food and drinks floating about. They vetoed my original thought to do a shepherd’s pie with beet mashed potatoes to recreate the birthday cake Harry was gifted by Hagrid one year.

Jenny suggested a Weasley-style meal, bacon sandwiches, roasted potatoes, and salad as discussed in this Nat Geo article. Ron Weasley is one of Harry’s best friends, and his home is always full of people and chaos. That kind of food, I could definitely do. 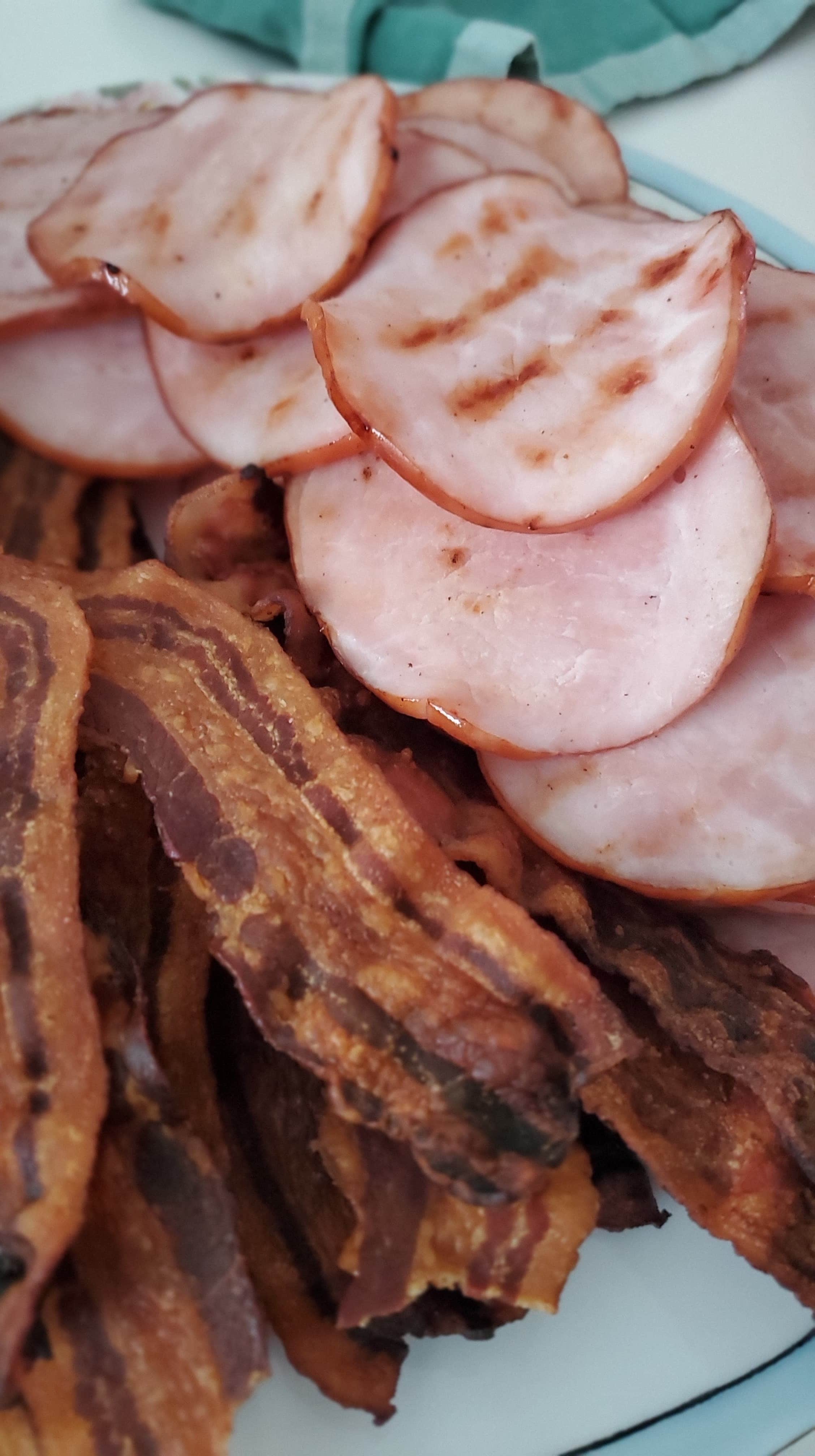 Sourcing proper British-style back bacon was not going to be easy, so I wimped out and subbed Canadian bacon. Inspired by Our Modern Kitchen, I made their bacon jam the day before, and a whole platter of Canadian bacon and oven-baked streaky bacon, served with homemade Dutch oven whole wheat bread (using Chand’s Kitchen’s recipe) and crumpets.

I used Serious Eats’s Best Roast Potatoes recipe — and they were. Crunchy on the outside and soft and creamy on the inside. Our potatoes were a mix of the teeny tiny ones from Trader Joe’s and homegrown ones from our favorite farmers at Well Rooted Farm.

In keeping with a generically British theme (and because I had a mushroom collab on Monday), there was also a mess of shrooms cooked down with white wine and miso, a la Drizzle and Dip. The dried mushrooms in our version Jenny had brought back from Mepkin Abbey.

We also had all of the dips in the Flat 493 fridge, and a selection of cheese, crackers, and crudites to make it a full spread.

Now, Suzanne is an expert fudge maker, as well as my own personal Bellatrix, so I decided we needed to have a potions class, where she taught my sweet-averse self a thing or two.  We used this recipe from Cookie Dough & Oven Mitt.

Eariler, Suz had made her own version, for funsies. And she cast a much better spell. Mine is acceptable, but there is a reason she is the expert!

Then, of course, we had to have drinks.

Butterbeer is the most common drink from the world of Hogwarts. I went with a recipe from Buzzfeed…. because it required buying the least amount of ingredients.  You can find it in this article, and, yes, I made the butterscotch syrup they link to. Very unlike the version they sell at Universal, the tartness in this one from the apple cider was very approved by all in attendance.

Because I can’t say no to bubbles, we also did this fun Felix Felicis I had found on Pinterest one million years ago. I’m not exactly sure how the honey was *supposed* to integrate, BUT it was tasty. And there was gold glitter. 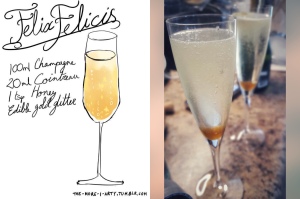 One of my favorite cocktails is a negroni — bitter yet slightly sweet. Go figure. One of my favorite food bloggers has a Death Eater version [they’re head baddies] so I had to make it. Pomegranate juice makes it darker than a usual negroni, with activated charcoal to turn it even darker.

As you may or may not have heard, the author of these magical books has recently proven herself to be, well, a Death Eater. She is of the mindset that transwomen are a threat who will erase “real” women. Ironic for someone who (a) used her initials to hide that she was a woman when she published these books and (b) also writes a mystery series under a male pseudonym.

Much like someone having gay marriage does not affect my hetero one, my femininity is in no way threatened by transwomen. The excuse that predatory men will pretend to prey on women in restrooms is utter hogwartswash. Predatory men are gonna prey, and, heck barely serve any time when they do. [is this a second post in a row reference Brock Turner? Yes, yes it is.]

Like many “gender critical” folk — aka TERFS (trans-exclusionary radical feminists), Rowling tries to say her argument is biological. But nowhere in the biological world is sex ever black and white.

If those opposing trans rights were to just say “we want to take away the rights and freedoms of trans people” they know it’d sound as heinous as it is, so, just like “Race Realism”, the goal is to find something in biology that they can point to and say “see I’m not transphobic, that’s just what the science says”. And it’s so much easier to win people over to your side if it looks like you aren’t expressing an opinion and are in fact just “saying the truth”.

You can read her whole rebuttal to this argument here.

I don’t usually like to talk about my own philanthropic habits, but I will say that I have recently become a supporter of the Okra Project — and one reason is to do my wee part to counteract all the hate that Jo is spewing.

In addition, my friend Thao, who has been making fantastic masks, made some that are related to the theme of this post and to supporting trans rights.

Equal rights ain’t pie, y’all. Love one another. Eat good food. Have a black cocktail. And find a house elf to do all these dishes.