That’s a wrap! The habits are off to the dry cleaning and another show opens at the Barn tomorrow night.  What a lovely experience with a darn talented cast!

Our director and choreographer went along with my plan to wear black Chuck Taylors for Sister Robert Anne a la Sister Clarissa, the gym teacher in The Trouble with Angels. But what about for the tap number….?

As I was debating what tap shoes to buy, one day early in the rehearsal process, I went to a new dentist. It took a very long time to be seen, but I had a book, so whatevs. On the way out, the receptionist handed me a Wal-Mart gift card for my “troubles”. It turns out WalMart.com carries sequinned sneakers from DiscountDance.com. And one of my dear friends just changed out taps and had a pair to spare. And I had time to make this happen before tech week…. Because we only had the one tap break and it wasn’t particularly long, I had no trouble getting the taps to stay on with some short screws. And because the soles were thick, they never came through the bottom. I love it when a plan comes together! …and I get to amuse myself in the process. Especially when the entire project is FREE! 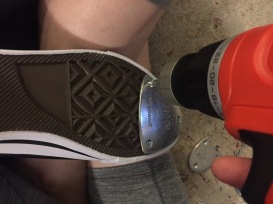 Another funny (to me) story: the afternoon of our closing matinee, Lifetime was airing a movie entitled Bad Sister. Clearly, I had to set the DVR and watch it when I got home. Props to whomever decided “Sister Sophia” should have a touseled blonde lob!

Now that it’s all over, I realize why Nunsense has stuck around and been in constant production for so long: it’s just plain fun. Yes, we did have two people not see the joy and say we were all blasphemers who are going to Hell… but if my conservative parents had fun… and our Sister Leo was even allowed to be in it… well, I’ll take my chances that the big guy upstairs is ok with some levity around religion.

That’s all from this group of Little Sisters from Hoboken! ‘Til next time….