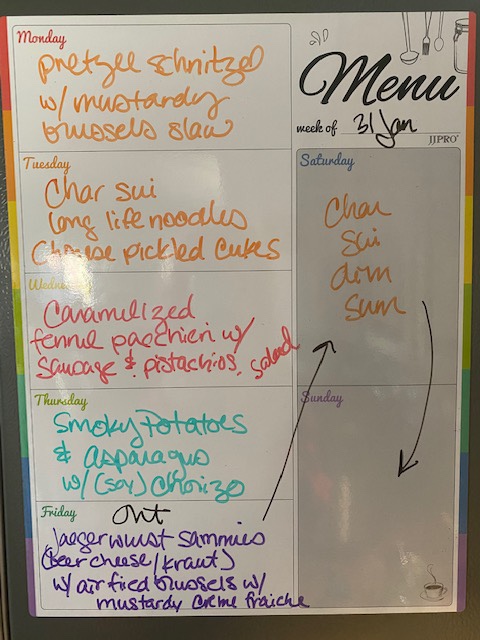 Mon 1/31: Pretzel Schnitzel with Mustardy Brussels Sprouts Slaw. We don’t do Mayo, but I love a Brussels salad with lemon, EVOO, and parm, esp. paired opposite a heavy meat. We added creme fraîche to this and Hampton firmly joined me on team raw sprouts. He also mixed some creme fraîche and mustard for a pork dipping sauce. We should have maybe pounded the pork more? But altogether a fun Monday meal.

Tues 2/1: Char Sui, Long Life Noodles, Chinese Pickled Cucumbers. We chose a Lunar New Year meal based on this post from Soupbelly. The pork and noodle recipes came from Woks of Life, and we used Candy’s own cucumbers. We got pork shoulder from Smoke City, of course, and Hampton, king of sauce, prepped the marinade while we prepped Monday’s German meal. I worked from home this day due to some construction at work that was taking out the power to my tiny office, and while I would have trusted Hampton to cook it, clearly, I was glad to not have my usual terrible commute so I could join in the fun before rehearsal.

Wed 2/2: Caramelized Fennel Paccheri with Sausage & Pistachios, salad. One last meal to use up the fennel from last week’s veg meal. And that killed my thumb for the salmon dish last Sunday. It also almost used up the paccheri that we sourced on our last Wegman’s trip. I don’t fully understand what sauces go with what noodle shape, but I do love these really big tubes. We used kale leftover from my lunches and the aforementioned Sunday salmon for the greens bc I hate the texture of wilted salmon. And also to finish the bag of kale.

This was so yummy! Next time we need hotter Italian sausage and will add some Trader Joe’s sofrito (dried tomato, onion, pepper…) toward the end of the fennel caramelization/as the wine and pasta water cook down. Also: I accidentally let the butter for the pistachios brown and holy heck. Next time, we will drain it off while we prep the rest of the meal and add it to the sauce earlier. And possibly more of it (;

Thur 2/3: Smoky Potatoes with Asparagus and Chorizo. Used up potatoes and asparagus and introduced me to the famous TJ’s soy chorizo. So easy and flavorful.

Fri 2/4: *out* A (forgotten about) event at my work meant fancy sushi.

Sat 2/5: Jargerwurst in pretzel rolls with beer cheese and kraut, air-fried Brussels with mustard creme fraîche. One of our fave sausages from Smoke City and trying to perfect our own beer cheese.

Sun 2/6: char sui dim sum. With all the pork leftover from Tuesday, we decided to try some new things. I have been wanting to try to make bao buns for a while — even though I am NOT a baker. We used this recipe and have some ideas to improve for next time [not the recipe’s fault, ours]. Also, there is no good reason why we haven’t used wonton wrappers yet. They are so versatile and handy. SO, clockwise from the bottom —

1. wontons filled with pork, some mushrooms that needed to be used up [Hampton made up a sauce for them using black vinegar, soy sauce, hoisin, and sesame oil], and some cream cheese a la his beloved delivery crab rangoon. We used this timing and next time I will use much less olive oil spray. Still fun.

2. bao buns with char sui and cabbage slaw. We used this recipe and rewarmed slices of the pork in some butter. Pre-mixed cabbage slaw was tossed with a random generically Asian leftover sauce in the fridge.

3. Summer rolls with char sui, leftover Chinese quickies, some fresh cucumber and carrot, and rice noodles. Too. Many. Rice. Noodles. Lessons were learned. But it was nice to have a cold component to balance the chewy buns and crispy wontons.

Lunches: Cajun Roasted Cauliflower Salad. It’s official: I am “don’t mix kale and cauliflower for meal prep” years old. Or maybe it was all the raw veg I added. Either way, instead of feeling skinny from all the healthy food, I felt puffy and bloaty. Whoops. Great flavor, though!